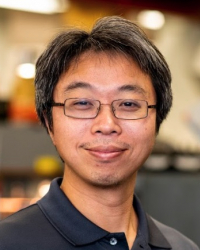 Professor Hsu received his Ph.D. degree (2003-2008) from the University of California San Diego after he earned a bachelor degree (1995-1999) and a master degree (2000) in National Taiwan University, all in Physics. He worked as a Chamberlain Fellow (2008–2012) at the Lawrence Berkeley National Laboratory and joined the faculty at the University of Washington in Fall 2012.

Professor Hsu began his career as an experimental particle physicist since undergraduate year. He installed and commissioned the Extreme Forward Calorimeter for Belle experiment at KEK in Japan and analyzed the earliest e+e- collision data to confirm the anomalous large production of B->eta'K for his master thesis under Paoti Chang's supervision. His Ph. D. thesis, done under the supervision of Frank Wuerthwein, was a detailed study of diboson production and the Standard Model Higgs search with CDF experiment at Fermilab.

As a Chamberlain Fellow, Hsu led the development and commissioning of ATLAS Pixel DAQ software in particular the Read Out Drive Digital Signal Processing, pioneered in the Inner Detector tracking alignment and played significant role on muon performance studies in both pronton-proton and heavy ion collision. He led the first measurement of ZZ production and search of ZZ resonance at high mass. Hsu served as the Standard Model Electroweak co-convener and diboson contacts in the LHC Electroweak Working Group since 2011.

Professor Hsu continues the investigations of electroweak symmetry breaking by measuring the properties of 126 GeV particle discovered in July 2012 at LHC and the search of physics beyond the Standard Model by studying vector boson scattering at TeV energy scale with boosted jet substructure techniques.