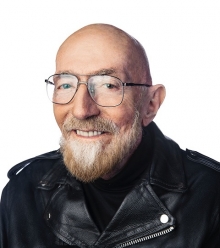 In the 1960s, when Kip Thorne embarked on his career as a physicist, there were hints that our universe might have a “warped side”:  objects and phenomena such as black holes that are made from warped spacetime instead of from matter.  Most of Kip's half-century career has been devoted to converting those hints into clear understanding.  He and his colleagues have explored the Warped Side through theory (using mathematics and computer simulations to probe what the laws of physics predict) and through astronomical observations (primarily with gravitational waves).  In this lecture he will recount the history of those explorations, he will describe what we now know about the Warped Side, and he will speculate about the future.

Kip Thorne was born in 1940 in Logan, Utah, USA, and is currently the Feynman Professor of Theoretical Physics, Emeritus at the California Institute of Technology (Caltech). He received his BS in Physics in 1962 from Caltech and his PhD from Princeton University in 1965, then returned to Caltech on the professorial faculty in 1967.

At Caltech, from 1967 to 2009, Kip led a research group working in relativistic astrophysics and gravitational physics, with emphasis on relativistic stars, black holes, the theory of time travel, and especially gravitational waves. Fifty-three students received their PhDs under his mentorship, and he mentored roughly sixty postdoctoral students. He co-authored the textbooks Gravitation (1973, with Charles Misner and John Archibald Wheeler) and Modern Classical Physics (2017, with Roger Blandford), and was sole author of Black Holes and Time Warps: Einstein's Outrageous Legacy.

Kip was cofounder (with Rainer Weiss and Ronald Drever) of the LIGO (Laser Interferometer Gravitational Wave Observatory) Project. LIGO – in the hands of a younger generation of physicists – made the breakthrough discovery of gravitational waves arriving at Earth from the distant universe on September 14, 2015. For his contributions to LIGO and to gravitational wave research, Kip shared (with Weiss and LIGO Director Barry Barish) the 2017 Nobel Prize in Physics and several other major awards.

In 2009, Kip stepped down from his Caltech professorship to ramp up a new career at the interface between art and science. This has included 1. Research on geometrodynamics: the nonlinear dynamics of warped spacetime. 2. Christopher Nolan's blockbuster movie Interstellar (which sprang from a Treatment Kip co-authored, and for which he was Executive Producer). 3. Kip's book The Science of Interstellar. 4. A new movie project that is shrouded in secrecy. 5. A collaboration with composer Hans Zimmer and visual effects guru Paul Franklin on multimedia concerts about The Warped Side of the Universe. 6. A forthcoming book on The Warped Side of the Universe, composed of paintings by the artist Lia Halloran and poetry by Kip.