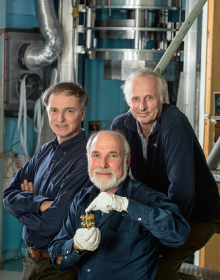 Our understanding of fundamental physics is so powerful that we can make confident statements about our 13.7 billion year old universe when it was only a minute old. This understanding is based on combining the “standard models” of gravity (Einstein's classical general relativity) and of particle physics (gauge quantum fields of the weak, electromagnetic and strong interactions). Both of these have been tested extensively and precisely and no convincing breakdowns have yet been observed. But this hides huge problems; the two standard models are inconsistent with each other, and do not account for dark matter and dark energy that constitute 95% of our universe. Naturally, theorists have devoted huge efforts to solve these problems and inevitably had to invent new particles or extra space dimensions that were undetectable by any existing experiments.

In 1985 a small group of UW nuclear and atomic experimentalists formed the Eöt-Wash collaboration to develop novel high-sensitivity torsion balances to test some of these theoretical scenarios and to search for subtle new phenomena associated with the breakdown of either of the 2 standard models. As our experimental sensitivity increased by orders of magnitudes, theorists proposed new mechanisms that we could test until a small “graveyard” of proposals was populated.

In 2021 this work was awarded the Breakthrough Prize in Fundamental Physics “for precision measurements that test our understanding of gravity, probe the nature of dark energy, and establish limits on couplings on dark matter.” I will review the extraordinary instruments we developed and the results we obtained from testing Einstein’s equivalence principle and the gravitational inverse-square law, and probing for Planck-scale Lorentz violation using a quantum gyroscope with no moving parts.

Eric Adelberger received his higher education at Caltech, earning a BS in 1960 and a PhD in 1967. He was fascinated by the role of symmetries in particle theory but not by the style of experimental work at big facilities. He found that experimental nuclear physics with a focus on breaking of fundamental symmetries in nuclei provided both intellectual excitement and an outlet for his interest in developing instruments for precision measurements.  He was a Postdoctoral Associate at Stanford University and an Assistant Professor at Princeton University before being recruited by the University of Washington where he found a marvelous environment for experimental work and for collaborations with theorists. He received the Bonner Prize of the American Physical Society for his studies of isospin and parity symmetry breaking in light nuclei. His interests turned to gravitational physics in 1986 when he and Blayne Heckel, who had both made precise measurements of tiny, but important, effects learned of a theorist’s claim that evidence for a fifth fundamental  force, much weaker than gravity, was hidden in a famous old test of Einstein’s Principle of Equivalence. They, together with postdocs and grad students, including Jens Gundlach, rapidly developed innovative technology for detecting ultra-weak forces and showed that the proposed new force did not exist.  But, recognizing that that a new generation of Equivalence Principle tests would be powerful probes of subtle forces undetectable by conventional means, they decided to form a unique experimental gravity group with a particle-physics focus and obtained funding for this from the NSF. The timing was perfect; the world-wide focus on the problem of unifying gravity with the other three known fundamental interactions has moved to center stage and many new ideas for achieving this unification had consequences (such as hidden extra dimensions, breakdown of Lorentz symmetry) that could be tested with their exquisitely sensitive instruments. Adelberger has received many honors: membership in the National Academy of Sciences, the 2021 Breakthrough Prize in Fundamental Physics (shared with Blayne Heckel and Jens Gundlach), named lectureships, service on national and international review committees and advisory panels, invitations to write review articles, etc. But it must be said that working at the UW has been a hell of a lot of fun and that is the best reason for doing science.

Blayne Heckel received his PhD from Harvard University in 1981. He was a Postdoctoral Fellow at Harvard and Staff Scientist at the Institute Laue-Langevin before coming to the University of Washington as Assistant Professor in 1983. His research interests include experimental gravitational physics, experimental atomic physics and neutron physics. Prof. Heckel was awarded the Presidential Young Investigator Award, the Sloan Research Scholarship and the 2021 Breakthrough Prize in Fundamental Physics.

Jens Gundlach obtained his PhD in nuclear physics from the University of Washington in 1990, and has been at the UW since, where he is now Professor. His research interests are pretty close to the opposite ends of the research spectrum: fundamental physics and biophysics. Prof. Gundlach is a Fellow of the American Physical Society, and received the Francis M. Pipkin Award of the American Physical Society and the 2021 Breakthrough Prize in Fundamental Physics.