The DØ Experiment at the Tevatron RunII (Fermilab)

The Tevatron RunII has been successfully taking data since 2001, after a complete upgrade of the Run I detectors that discovered the top quark in 1995. The DØ detector has been performing extremely well since then with added tracking capabilities and a new data acquisition system which is in part responsibility of the University of Washington group. The group is also participating in the construction of an innermost layer support for the silicon detector to be installed in 2005. We are actively involved in the analysis of top quark physics and have ample experience on searches for supersymmetric Higgs bosons. We currently have more than three times the data collected during Run I at a greater energy of 2 TeV and expect to increase this to at least forty times by the time the LHC comes online. This unprecedented data sample will allow to do precision electroweak physics and search for physics beyond the standard model while preparing the way for the type of physics to be seen at the LHC. Graduate students collaborate on the day-to-day data tacking activities and data analysis on site, near Chicago, in an active and international environment such as Fermilab. 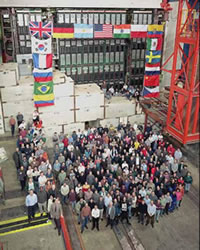