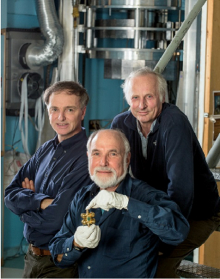 In 1986 Professors Adelberger and Heckel founded the Eöt-Wash group, devoted to precision measurements testing our understanding of gravity and probing the existence of possible new fundamental forces and the interactions of “dark matter” (constituents of nature of which, to date, have only been observed through their long distance gravitational effects).  Professor Gundlach joined the group at its inception while a graduate student, and subsequently became a tenured faculty member in the department.  Their work has led to dramatic advances in laboratory tests of gravity including precise measurements of the equivalence principle — the observation that all objects, regardless of their composition, experience exactly the same gravitational acceleration — as well as very challenging short-range tests of the inverse-square law which set the best constraints on many speculative models of possible new physics beyond the Standard Model.  Their work has also greatly improved the precision in the measured value of Newton’s gravitational constant.  The Breakthrough Prize is terrific recognition of the significance and impact of this unique research effort and long-standing collaboration, which has been a wonderful part of our Department.  Congratulations to all!

Eric Adelberger was also featured recently in an American Institute of Physics interview.