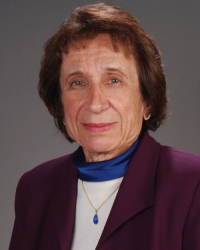 Lillian C. McDermott is a Professor of Physics and Director of the Physics Education Group at the University of Washington.  She received her B.A. from Vassar College and a Ph.D. in experimental nuclear physics from Columbia University (1959).  She is a Fellow of the American Association for the Advancement of Science and the American Physical Society.  Among her most significant awards are the 2002 Medal of the International Commission of Physics Education (International Union of Pure and Applied Physics), 2001 Oersted Medal of the American Association of Physics Teachers (the highest award of the AAPT), the 2000 Education Research Award of the Council of Scientific Society Presidents, and the 1990 Millikan Lecture Award of the AAPT.  The American Physical Society selected the Physics Education Group as the recipient of the 2008 Excellence in Education Award.  The group conducts a coordinated program of research, curriculum development, and instruction and has worked to establish research on the learning and teaching of physics as a field for scholarly inquiry by physicists.